Mummy Flower Tea: The Rise of The Bastard Saffron. 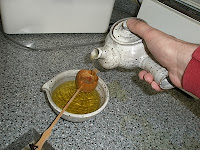 홍화차 Hong-hwa cha or red flower tea. I picked it up from a tea vendor in the narrow crowded streets where Kukjae market turns into Jalgachi. All it said was 호화차 and nothing more. I bought it and brought it home to discover its wonders.
The red flowers when steeped for a mere 30 seconds brings forth a rather strong  amber tea. It had a flavor like lemon peel without the sour bitterness with a light pure honey aftertaste. 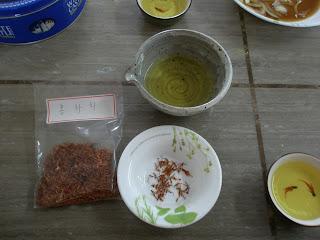 My wife and I quickly employed the tea in our meal and soon discovered it easily took away  the onioney aftertaste of Chinese our food. It was quite remarkable in that it removed the onion after taste quite easily while leaving only this gentle honey flavor in its place.

Consulting one of my teabooks I discovered this red flower was "Safflower"or Carthamus Tinctotrius. 새플라워 in the Korean. I then learned that in the culinary arts this flower is often referred to as bastard saffron as it is often used as a cheaper saffron. The book also stated that the rags used to wrap mummies was colored using Safflower giving the mummies wrappings a slightly yellow color  According to Wikipedia however, these flowers were used to form a lovely garland for King Tutankhamun. Later this week I'll try mixing some into my rice.

The flowers in dried form look alot like the near microscopic shrimp you get as a sidedish when you have dweji gookbap as you can see above. This flower tea is rather quite common, they sell it in Nampodong as well as in Someyeon's 오!자네왔는가 teahouse. A particular teahouse I shall be visiting again tomorrow and reviewing for you with menu assistance notes later this week. Till then, stay steeped.