Apologies for the lack of pictures in the tea tour post. Here it is recast below. Tomorrow I'm off to Kyungsungdae's Tea House named "Sicily" which has for many years been turning PKNUs professors into true Sicilians. I shall also be looking for a teashop rumored to be located on the street behind K'dae's Century building. Stay tuned and hence without further ado...Tea Tour Part 1.2:

For those searching for teashops and tea houses look no farther. There's lots to cover so be patient, I aim to cover 'em all starting with Nampodong. Over the course of my 8 years here I have seen teashops and houses come and go. As to date in Nampo I my count is 2 teahouses 5 teashops.
Here are a few I dropped by earlier today. 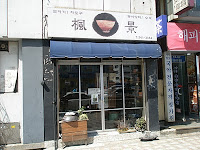 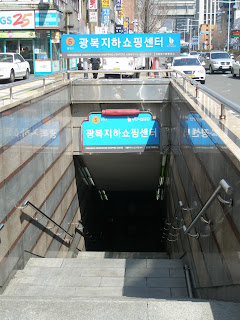 Here you can see exit 5 and the GSMart that is located nearby. Walk over to the GS and take that street on the left. Right where that white car in the picture is, yep, that street. 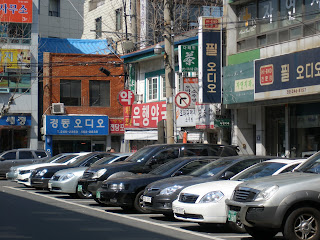 Next you'll see what's pictured below. This is the side street. The teashop is above the pharmacy (약) eeeeew Yagk: that's Korean for medicine. The teahouse is called 다래헌 or DaLaeHun. They serve a fine Boeycha there. I have yet to sample the rest of their menu. 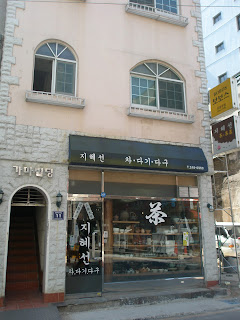 If you turn right at the pharmacy and go straight to the next intersection and turn left you'll find one of the best teashops in Busan.  지혜선 (JiHyeSun)named presumably after the owner, has a decent range of teas. Plenty of Oolongs and the Pu'er teas there are right from china all wrapped in bamboo ranging from 20,000won to 300,000won.
The street its on runs parallel with the GSmart side street.
(They also have alot of teapots of the Chinese and Korean variety along with teabowls for Japanese green powder tea). 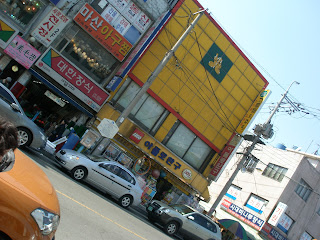 This next teashop is called 고물들의 미팅 or used stuffs meeting (GoMulDulUi Meeting.... sounds better in the Korean). It is an antique store with most of its stuff coming from .

To get there you need to get to Nampo's . Its the street with the underground art shops that isn't connected to the subway line. (why they haven't connected them I don't know *hmph*). Suffice, The easy way to get to the street is to go to (the one with the 3 movie theaters) and walk to the StarBucks. When you turn the corner @the starbucks there's a Hagendaz. That's how you know your on the right track and street.
Go straight until you see your first children's toy shop (pictured upper left). There's 2 toy shops on that street. The little side street next to the toy shop is the one you want.
Right next to the toy shop is the antique store. I will post details regarding their portable teasets later. Do stay tuned to channel T, where like OPS bakery "Tastiness is transmitted" and transmission ends upon consumption. 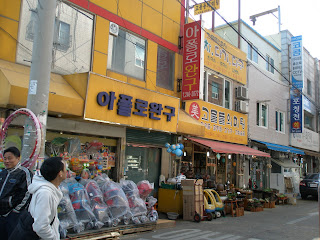 GoMulDulEui Meeting has alot of inexpensive tea items and is one of the best places to go for a first time shopper. Many of the other places have either expensive teas or parts of tea sets to add to ones collection. 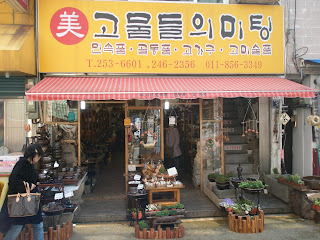 On the first floor they have teapots and various teas; mostly the cheap everyday kind of teas Pu'er and Japanese green tea powder both usually go for 20,000won. Lower end tea but stored well in metal containers and that's about the average price for Japanese green tea. They also have many imported Chinese items that are great as gifts to send home.
The real gems are located on the second floor where they have tea boards (more on that later), and even portable tea sets that you can bring hiking or camping.
Posted by Matthew Thivierge at 11:25 PM