Two Tea iPhone Apps as cool as a Geisha in glasses.

For those of you into tea and with a smartphone here are a few tea apps I've found in my forays into the world of tech.

My most recent discovery was found via App Annie called iSado. Sado, also known as chado is way of tea which refers to the Japanese tea ceremony. It is a useful tool for learning how to make tea the Japanese way as this particular version teaches the bare basic essentials to the Enshu or Samurai tea ceremony.
It offers a link to a youtube video where you can watch how to make the tea using a bamboo wisk. You can also make the tea virtually much like that of a computer game. At the end of making the tea you are assessed and given a score with advice on how to improve your tea making skills. If making matcha (powdered) green tea isn't your thing and your more into just drinking it, then do visit DaSoul in Someyeon where they serve it the best in Busan.

One of the earliest apps I'd discovered was Yoritsuki. I found it by searching for apps under "Zen" from which I found many Buddhist apps. From there I practically stumbled upon Yoritsuki a Japanese made app in English for the iPhone and also now for the iPad. Essentially it is a Japanese inn commonly known as a Ryokan. You can select the seasons, the weather and tonnes of interior design features to decorate the room. I find it most relaxing and great for when I find myself in an office or a cubicle and lacking the atmosphere that so enhances ones tea experience. 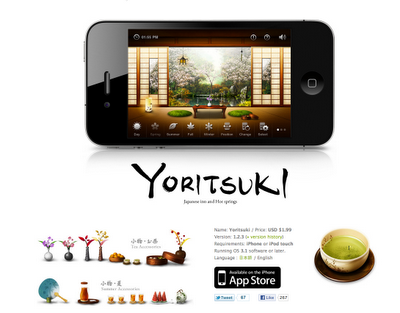 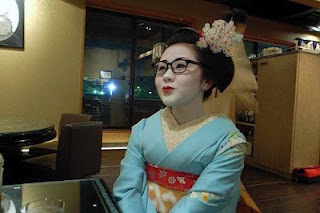 So there you have it : 2 apps for your phone that are as cool as a Geisha in glasses.
Posted by Matthew Thivierge at 10:52 AM