I've found what is indeed currently the best teashop in Busan for hardware ! The shop is called Dae-Dok Myung Cha.  Although they do have some tea on hand for sale, they far surpass all other teashops in town for hardware quality, variety ~and~ price ! Directions to which may be found @the bottom of this post. And now into the review : 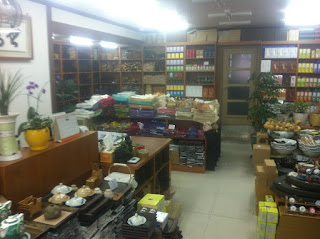 When you first walk in the door you'll find right at the front stacks of Korean tea sets all selling for 40,000won and up ! They have everything you'd need for a Korean tea ceremony including the cloth teaset covers at the back in their tea cloth & towel department. (pictured above at the back left). For Japanese Tea Ceremony they have several natsume (powdered tea containers) some fine laquerware ones and also ! : ones for nodate-picnic style sets with tupperwear style lids hidden under their shiny tops.

They have sandalwood incense (best used for standard tea ceremonies unlike the other floral Buddhist temple blends that most shops carry). 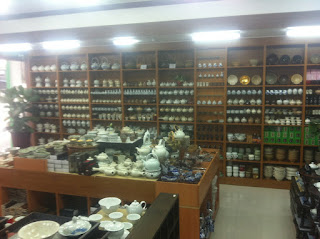 They have a wide variety of Yixing teapots as well as western style teaware. Dae-Dok Myung Cha also has Koren style celodon teapots too.


While I was wandering around their store I was in a tizzy wondering what didn't they have and I discovered they had Shilla Dynasty style teacups two different kinds! Basically one kind looks like black ceramic shot glasses but twice as tall and with a long curved pouring lip like you'd see on western cream container. So they're like the Chinese but bigger yet smaller than a mug. Great for any kind of strong tea or even sake or soju !
The other kind of Shilla teacups they have look like mini cauldrons on tripods ! Ideal for a nice nighttime fireside tea. 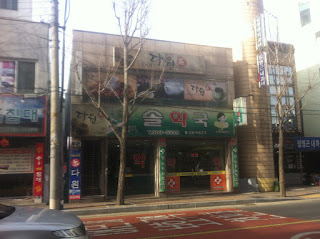 Here's a teahouse on the 2f on the same street. It says Dawon on the sign (tea place in Korean). I haven't been in there as they seem to keep odd hours.  Keep going down the street (if you're coming from Sajick station Exit 3) to get to Dae-Dok Myung. And here it is pictured below : 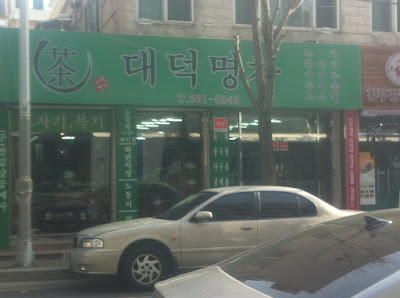 Dae-Dok Myung Cha is open everyday from 9am-7pm except for Sundays. This shop makes it well worth the trip to Sajick to see it as they have all the hardware you'd need to make any kind of tea in style!

Dae-Dok Myung Cha Tea store:-Do find them on the map below; I marked it with a fire sign for the time being.
Till next time,
Stay steeped!

Posted by Matthew Thivierge at 2:52 PM

Email ThisBlogThis!Share to TwitterShare to FacebookShare to Pinterest
Labels: teashop