The Rise and Fall of Green Tea in Powdered Form.

If you go far back enough in history, most of the tea was green, ground down into powder form, with small amounts tapped into a bowl and with warm water, wisked into a fine froth . Old school. This was how it was done.
Tea was served in bowls and not cups. Here in Busan it is possible to take your tea this way. Later this week I'll review the main teahouse for a bowl of powdered green located in Someyeon.
In most teastores here, powdered tea goes for about 20,000 won for a small tin. One tin will last you for a few months as you take it in small amounts. Many shops here sell the tiny scoops for the Malcha (말차) in Korean. In Japanese it is called Matcha. Many shops here also sell the bamboo wisks. I'll report on the shopping business later next month... Suffice here's the history :

Early in China's Song dynasty (960-1279) tea was taken almost like a soup with onions, pickle juice, ginger and orange peel. (Nowadays most of us foreigners have trouble with the pickles that come with our pizza !)
Later during the Song dynasty, farms began producing larger crops and farmers were able to grow a wider diversity of crops. Thus, tea became more widely grown making it less of a luxury and suddenly a drink even the poorest could afford. Teahouses flourished with many serving soups as well as tea savories.
As they are in China today these teahouses became centers for business meetings. Although during the Song dynasty they more closely resembeled the British coffeehouses of the 1800s : providing not only the latest news (no Internet then), but also entertainment. (Many British coffeehouses employed entertainers to read the news and provide humor as well as song).
It was during this time the green tea leaves were ground down into a powder form and whipped in hot water with a bamboo wisk. Tea was also taken in shallow saucers (called chen) as well as bowls while the tea in soup form understandably disappeared. Later, with the Mongolian invasions this tea culture changed greatly in China becoming what we now see mostly thoughout the anglosphere : tea infused in water with the leaves discarded.
Which brings one important point : with green tea in powder form : nothing is wasted and one gets the maximum health benefits of green tea when you take it in powdered form.

During the height and the waning of the Song dynasty in China, in Korea, green tea was also drunken in powdered form during the Goryeo period (981-1392). This method of taking green tea came from China which is one reason a small group of Koreans nowadays feel free to promote the Japanese Zen tea ceremony here in Korea, for even Zen Buddhism came from China originally.

It was during China's Song dynasty that a Japanese monk named Eisai travelled to China upon relations improving between these two countries. (Earlier Japanese pirates would raid Chinese ships while at the same time Japanese traders were trying to trade with China for, among other things, Chinese silks for their kimonos). China got fed up with it all and closed itself off entirely from Japan. This, is only part of that story, but I wish not to digress.
In 1191, Eisai came back to Japan with tea seeds and the teachings of the Rinzai sect of Zen Buddhism. He also brought with him the method of taking the tea in powdered form. Zen Buddhism stressed the value of developing a skill with the aim of the highest form of technique through self discipline it also taught a sense of defiance in the face of death that matched well with the Samurai code. Indeed, later in the 1300s many Samurai would regularily conduct tea ceremonies as well as collect tea implements for their beauty.

The Japanese tea ceremony first, developed out of the practical preparation of tea shortly after 1191. In the 1300s things became more artistic and focussed on the beauty or art around the ceremony.
Later the ceremony became more finely tuned when the ideals of Buddhism and Taoism came into influence.
These new ideals were greatly promoted by the monk Murata Shuko (1521-1591). He wrote of the value of unadorned objects, the cracked and imperfect as being a reflection of the beauty found in nature. It is this appreciation we find in the Japanese tea ceremony as practiced today. It was Shuko who asked by the shogun Yoshimasa to create a tea ceremony for him. Making Shuko the first tea master and official founder of the Japanese tea ceremony.


From the 1500s to the 1800s Japanese tea ceremony flourished. However, in the early 1900s Japan began a period of rapid modernization. Railroads were built across the country, shogunates became the present day prefectures as the Japanese military was modernized. It was during this time that scholar and samurai decendant Kakuzo Okakura came to New York and wrote his "The Book of Tea". Fluent in both Chinese and English, Okakura became disturbed by not the modernization of Japan but the utter disregard his fellow Japanese were showing as they carelessly discarded their own cultural heritage in adopting western ways. Okakura was greatly influential in the American art world, persuading many gallery owners and universities to begin collecting ancient Japanese art works. He served many as a consultant and art critic thus preserving many Japanese art works from destruction at the hands of his fellow countrymen. It is his work, "The Book of Tea" that is widely read today as a celebration of the ideals of tea ceremony and Zen philosophy. His work was written in English for foreign eyes to see the inherent values in ancient Asian ways and to appreciate nature, art and tea. It is available here in Korea from http://www.whatthebook.com/ :) It is due to the works of men and women like Okakura that the art of tea is preserved todays modern times. 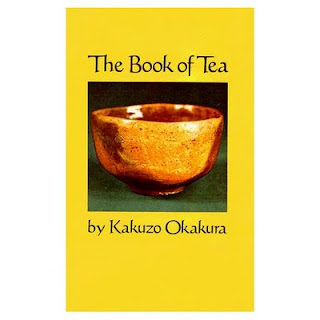 Posted by Matthew Thivierge at 11:40 AM